Back to: Grammar Awareness for IELTS course

The present simple tense is the main tense used when:

Speaking about habitual, repeated, and regular actions, as well as facts or true statements. We can also use present simple to talk about 'ongoing' things  (She lives in Paris - both fact and ongoing action).

One of the most common features of Filipino student's essays, is the jumping between present simple, past simple and continuous tenses. The differences between present tense Tagalog and its English counterpart are:

The simple and continuous are not the same in English.

Tagalog -  Natutulog siya sa gabi (He is sleeping at night / He sleeps at night).

He is sleeping (now) - present continuous.

He is sleeping  represents an action which is happening now.

In English  "He is sleeping at night = X" because, if you say 'at night' you are indicating 'every night' or 'at night time' (repeatedly). This becomes present simple due to the 'repeated nature' of the sentence.

YOU CANNOT USE THE PRESENT SIMPLE TENSE AND THE PRESENT
CONTINUOUS TENSE IN THE SAME WAY IN ENGLISH. You have to learn both tenses, learn how to distinguish between them, and how to use both correctly. (Btw, in my culture (UK) CAP's does not represent shouting or angry. It is used to highlight things, for them to be seen clearly).

Use of the past simple and present simple.

It does not make sense. (This is from a student essay).

The correct sentence should be: " Now that I am working, I don't have time to play basketball anymore"

Sorry i went through the sentence again but this is how it should be stated. (Bakit kailangan nating pagusapan ang nakalipas dito sa pangungusap na ito?" )
Why do we need to talk about the past in this sentence?  The fact that the sentence begins with "Now" should tell us that it is in the present.

When writing or speaking in IELTS, students must ensure that they are using the correct tense when writing/talking about the above things.

Writing for graphs, charts and tables.

When writing for graphs, charts, and tables, there are 2 categories. One with 'time' and the other 'without time' involved. Below you can see one example of each. The 1st chart is a 'static' chart, and the 2nd is a 'dynamic chart'.

This is a PIE chart which shows the number of books borrowed from a library.

There are no 'time' indicators therefore this is known as a 'static' graph/chart. 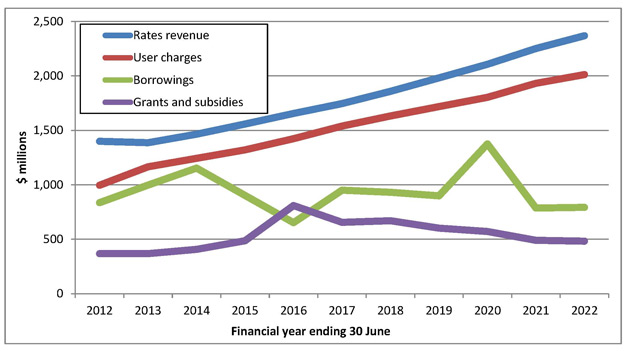 This graph is an example of a 'dynamic' chart/graph. There are time indicators along the x axis (bottom) which tells us 'movement over time' This is the basis of a dynamic chart.

The main differences in which tense to choose for an essay is determined by the graph/table/chart type.

WHEN THERE IS NO TIME INDICATED WE USE PRESENT SIMPLE TENSE.

Some example sentences which could be used with pie chart (no time).

43% of all the books borrowed are fiction.

History & Science have the same percentage.

Another issue which I constantly see is the lack of distinction between plural and singular (In English there is no 'mga'). You MUST be able to recognize and create sentences which show the differences (there is a lesson on this latter in the course).

Below are some examples of  present simple use ('present simple passive'). This is highlighting the differences between plural and singular verbs, and also countable and uncountable nouns (There is a lesson on this later in the course).

Look at the diagram showing a process of brick production. If you receive a diagram for a process you will need to use the present simple, but in the 'passive voice' (i am not sure why it uses the word 'voice'). Look at the example sentences which show present simple passive for both 'uncountable' and 'plural countable' nouns.

The clay is dug from the ground, and  is loaded in to trucks after which it  is transported to the factory where it is dried for the next stage in the process. (topic = clay = an uncountable noun/singular).

The bricks are moulded into shape, and are then are placed in an oven for baking. Following this process, the bricks are then cooled naturally in the open-air. They are then packed into boxes and are then loaded for shipment. (topic = bricks = countable/plural).

Click on the video (provided by www.myEnglishexam.com)  to see how the present simple is used for IELTS writing task 1.

(Past simple is also incorporated into the video to show the differences).

Use this table, bar chart, and pie chart to practice writing simple present tense sentences to describe the data provided. Make a title of your own if you need to. (Example sentences have been provided for you).

(Remember; all verbs will be in the PRESENT SIMPLE TENSE  because all the charts are 'static'.   Try to write as many sentences as you can for each graph).

AIDS has the largest research funding budget in Someland. 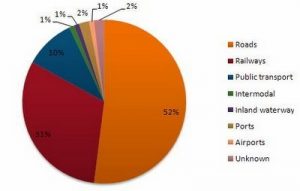 10% of all transportation consists of public transport.

When writing overviews for task 1 take into consideration what you are describing. Does it include 'time'?

2 examples of overviews with no time.(no graphs are provided). These are just example overviews.

Pie chart -  The charts shows that the largest proportion of people prefer to watch TV in the evening , while the smallest number do not watch TV at all. The other groups display a mixture of times throughout the day where both men and women watch TV.

Table - The table represents the percentage of workers who work at night in several employment sectors. Overall it shows that more people  do shift work from morning to evening, whereas, several groups undertake a variation of work patterns and enjoy different periods of leisure time.

The examples above show the lack of time. They (the writers) just interpret the data and provide it to the reader.

Time.(Usually indicates the past simple to be used).

What can be seen - (present simple passive, because the chart is being looked at now) overall is that readership decreased over the time period.  2 of the editions lost the majority of their reader base, while the others saw slight declines.  All but one of the editions had much lower sales figures than they predicted.

The 1st thing to do is to check the type of graph (static/dynamic).  This will give you an indication of whether time is involved. Sometimes you will see a mixture of both, where timelines as well as groups are shown.

Due to the fact that task 2 is an discursive essay, there is a chance that the need to change tenses may arise throughout the essay.

Generally essays will use the present tense because facts are being stated. References to information will often come in the past simple form.

Eg: Many people are against the use of animals for research purposes. It is said that these tests cause unnecessary pain and they give mixed results, because animal metabolism is not the same as human's. (General statements).

Research conducted in 1991 showed that the tests made on animals did not provide safe enough results for products to be made for people. (Previous  information/actions).

So when writing for task 2 bear in mind that when you refer to a past event, your tense must be in the past. When referring to general statements and ongoing facts, use the present tense.

We are not looking at the past simple in this class but you have to be able to see the differences.

Here are examples of 'present simple tense' sentences for the 3 charts.

Here are some possible example sentences for the 3 charts, using the present simple tense.

Leprosy and Tropical diseases have identical amounts with roughly $80m each.

Funding for TB is the lowest with around $25m

Malaria and TB are the 2 least funded.

Roads make up just over half of all transportation.

Airports contribute 1% of the total amount of transportation.

Almost everyone surveyed in each group enjoys watching TV/DVD's.

Reading books counts for an average of 65% of all people.

Example overviews for the 3 charts using the 'present simple tense'

The bar chart represents the amount of funding the government donates to medical research in Someland. Overall we can see that AIDS has the largest amount, while TB is at the bottom.

The pie chart gives a representation of the transportation services which serve the city. Generally the view is that roads consist of more than half, railways are next, and several systems make up less than 10%.

The table provides information about the leisure activities 3 different age groups enjoy. On the whole, watching TV, being with friends, and listening to music account for over 90% in all groups, while dressmaking/needlework accounts for less than 10% in the 16-19 age group.

This is the end of the 1st lesson. We hope you have enjoyed it, and got some useful information to aid your grammar.

Please enroll if you wish to begin the next lesson.